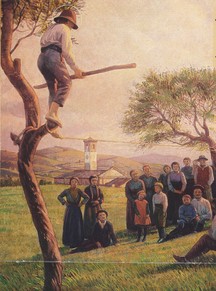 Saint John Bosco, or "Don Bosco" as he is more popularly known, was born in 1815 in a humble cottage of Piedmont, Italy. Fatherless by the age of two, he was educated by his saintly mother, "Mama Margaret", and a friendly priest, impressed by the young boy's gifts of mind and heart.

As a boy Don Bosco was very talented. He performed acrobatics and feats in gymnastics for the locals, one of his famous tricks was walking the tightrope for others to look on and enjoy. He used his gifts and abilities not to draw attention to himself, but to gather crowds of people with whom he would share God's word and teach Christian doctrine, usually through stories. As he grew up his talents grew and his knowledge of God grew, so he continued to attract people to him through his entertaining and captivating way of teaching.

While he was still young, his mentor died and John Bosco had to work hard to continue his education. In spite of his many hardships, John Bosco studied and worked his way through to the priesthood.

To the Streets of Turin 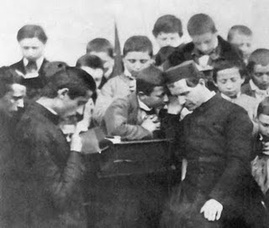 After overcoming the hardships of such great loss as a boy, the young priest became more aware of God's call to care for the youth when, in 1841, he began a ministry among the poor working boys in Italy's industrial center of Turin.

Turin, at that time, was caught in a political crisis; a situation made worse by the stress of the Industrial Revolution. The rampant poverty of the rural and mountainous regions surrounding Turin forced many young people to seek the imaginary security and wealth of the city. With this migration came countless moral and social problems. Appalled by what he saw happening around him, Don Bosco decided to do something to ensure a better future for the tide of countless poor, working boys.

That's when Don Bosco founded the Salesian Society, named for his favorite Saint, St. Francis de Sales, who was famous for his gentleness and kindness. Modeled after the gentle bishop of Geneva, Don Bosco went out to tend to his flock following Saint's little piece of advice, "You can catch more flies with a teaspoon of honey than with a barrel of vinegar". 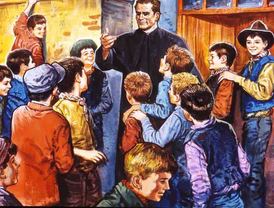 Starting with a handful of teenagers, Don Bosco soon had several hundred boys coming to him each week for Mass, religious instruction and recreation; gathering around him crowds of youngsters in need of shelter, education and love. He referred to these informal Sunday gatherings as the "Oratory of St. Francis de Sales". From that first youth group, Don Bosco was able to initiate youth centers, academic and trade schools, churches, seminaries, and world wide missionary activity, all centered on the youth and their needs.

Don Bosco's Salesian Society stands out in Church history as an interesting instance of a religious congregation literally founded on young adults. While earlier orders and congregations were generally founded around a select group of spiritually motivated adults driven by a noble ideal, Don Bosco did not choose older men or even persons from among his peers to establish his religious family. The first members of his congregation were recruited from among the young who had lived with him during the blossoming of his first Oratory in Turin. They became the first directors of his Salesian schools and spearheaded his first missionary expeditions to Latin America. In fact, bishops from Argentina complained that "Don Bosco is sending us boys!". One of those boys, John Cagliero, however, would grow to became a great missionary, a bishop and a cardinal.

As a born educator and led by the example of St. Francis de Sales, Don Bosco was convinced that a young person could best be caught by the "heart". Using his talents for magic and gymnastics, he related with the boys on their level. He found ways to meet them where they were on the street and as children. It was his consuming interest in the young, the poorest and most neglected among them, that won for him the admiration of the world.

By the time of his death on January 31, 1888, St. John Bosco had authored over one hundred books, he was the trusted friend of Popes, kings, statesmen and literati. He played no small part in the affairs of both the Church and the State in 19th century Italy. However, what he did for the young and the poor will be what he is best remembered for. 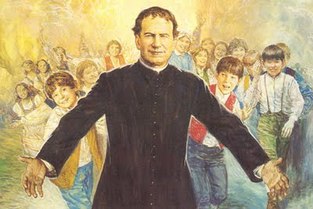 "The figure of St. John Bosco, the friend of youth, continues to exert a fascinating attraction for young people of the most widely differing cultures under heaven...the substance of his teaching remains intact; the unique nature of his spirit, his intuitions, his style, his charisma are unchanged, because they draw their inspiration from the transcendent pedagogy of God." - Saint Pope John Paul II

Due to his sanctity and unique way of educating the young, Don Bosco is admired and followed even today. His method of education, or the "Preventive System" is based on: reason, religion and loving-kindness. His aim is always "prevention" - rather than "repression" - encouraging young people to be their best rather than simply punishing them for their misconduct. The root of his method is found in both: his compassionate love for the boys and, more importantly, the example of the pastoral charity of Christ, the Good Shepherd.

The Preventive system aims to do exactly what it says. It aims to "prevent" mishaps rather than punish them. It consists of informing the youth of the rules and regulations, but then supervising them in such a way that being always with the assistants, they do not get into mischief. These "assistants", as so many loving fathers and companions, speak to the pupils, guide them, advise and correct them kindly - all summed up as a united effort to help the youth become the best they can be.

This is all based on three principles and goals:

Reason is the ability to think, know, understand, communicate, dialogue and, ultimately, make free choices.  John Bosco used to say that students must not only be loved; they must know that they are loved. Developing authentic relationships between students and teachers is key since free choices are not based on constraint or fear. Free choices are made outside of fear and are based on conviction and love - which can only be fostered through the establishment of relationships and confidence, led by examples.

Loving-Kindness, which is gentle and yet strong, fulfills the basic need for establishing meaningful human relationships. This element is closely tied with "reason", which calls us to "be reasonable" and to trust the student to make choices out of conviction rather than fear. Through loving-kindness interpersonal relationships are formed and help to generate confidence between the young and those who walk with them on their life journey.

Religion is the glue that holds both "reason" and "loving kindness" together, it is the hunger to form a personal relationship with God.