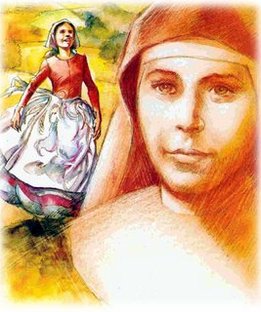 Mary Domenica Mazzarello was born, May 9, 1837, to a farming family in the rugged, mountainous region of Mornese, a small town in Northern Italy. She grew up in the fields working alongside her father's laborers and studying her Catechism. She was known, during her early years, as a fierce competitor - trying to outdo the workers in the field and studying hard so that no one in religious education class would be ahead of her.

As she learned to channel this competitive and ambitious spirit towards the Lord she joined the Daughters of Mary Immaculate, a sodality guided by her parish priest. The young women lived in their own homes, but met together to encourage each other in Christian life and to perform works of mercy.

Several years later, she would contract Typhoid while nursing sick relatives. Though she recovered, she never regained the strength to return to her favorite work in the fields.

Being forced from the fields, however, opened the doors to her greatest ambition. In a move unusual for a single woman during that time, she established her own business as a seamstress. This bold move was just the tip of the iceberg, her real goal lay in using her new position to teach girls a trade, share her faith and bring them to know the Lord. She confided to her friend: "Every stitch must be an act of the love of God". It wasn't long before families began to send their daughters to her to learn sewing and Christian doctrine. Then, poor girls and orphans came to board at the workshop. 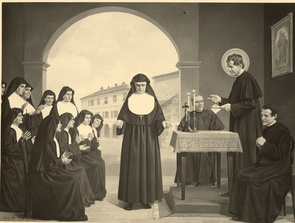 Though she was unaware of it, what Mary was doing for needy girls at Mornese was similar to Don Bosco's efforts among boys in Turin.

Don Bosco eventually visited Mornese and for the next several years, after that first visit, Don Bosco returned - always sure to keep in touch with Mary and her work. He noticed how she respected each child, patiently listened to their cares, and helped them overcome whatever might keep them from appearing "beautiful always in the sight of God".

In 1871 Don Bosco obtained permission from Pope Pius IX to found an order of Sisters, an idea that he'd had for a long time. Getting in touch with the parish priest that had first worked so hard with Mary Mazzarello to put her energies towards God, Don Bosco related his desire that Mary and some of her companions from the sodality form the core of this new order of women religious. The proposal caught the women by surprise, they felt too poor and uneducated to become sisters.

The Daughters of Mary Help of Christians were formed, and Mary Mazzarello was elected their superior. On August 5, 1872, Mary and fourteen other women consecrated themselves to God, pledging to follow the simple rule that Bosco had drawn up for them.

daughters of Mary, help of Christians 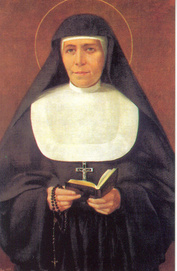 Don Bosco recognized Mary Mazzarello's natural gifts as a leader: "She possesses special gifts...her limited education is more than made up for by her prudence, her spirit of discernment, and her ability to govern, all of which is based on her unshakable faith in God".

He was right. Mary, with her great example of warmth and self sacrifice, took on the most common chores. She also learned how to write; sitting among the students and sisters much younger than herself, she demonstrated great humility as a younger, yet better-educated sister taught the class.

She continued to exemplify humility as the congregation grew steadily. Once, when asked to go to Rome to meet Pope Pius IX she said, "Don't you think, perhaps, that by going to Rome I shall lessen the esteem for the congregation? The Holy Father will expect to see in the Superior General a cultured and educated person, and instead he will see a poor ignorant woman".

Soon, the order was growing - in 1875 Don Bosco had sent the first Salesian missionaries to South America and the Sisters were not far behind. Two years later, six sisters were included on an expedition to Uruguay, where they established catechetical centers among the Italians who had immigrated there.

By the time of her death at age 44 in 1881, after only nine years as a sister, there were 139 sisters in twenty-seven houses - eighteen in Italy, three in France, and six in South America - caring for nearly 5,000 children and spreading the "spirit of Mornese", the loving, familial spirit of that first house in her hometown, to every new community.

Today the Daughters of Mary, Help of Christians are found on all five continents, teaching in schools, providing after-school care, holding classes for the poor, running youth centers with educational and recreational activities, and caring for the needy.

St. Mary Mazzarello implemented the "Salesian spirit" in "creative fidelity". In other words, she accepted wholeheartedly St. John Bosco's way while putting her own stamp on it by focusing on accompaniment.

In accompanying the youth, Mary Mazzarello did not rely solely on words, but established personal relationships in which she gave first priority to the presence of those she accompanied.

This presence and example is something she lived out every day amongst the girls, the poor and the sisters. Her intention to communicate through her own life the lessons she wanted to teach, and her commitment to being an example to those around her is very clear. The influence of her living example, for those she accompanied, was the stepping stone they needed to begin a life that lead to Jesus.

Besides recognizing her model efforts to be a living example to the youth, we can observe the dynamic road-map she created to establish these dynamic interpersonal relationships. These "developmental stages" can be summed up in three stages:

Establishing confidence was a huge part of the example she gave to the world, on giving advice she said, "my dear, I strongly recommend that you be a good example...if you want your daughters to respect you and have confidence in you". In her relationships Mary Mazzarello established confidence with a characteristic loyalty and fidelity - she offered the security of an authentic relationship to those she accompanied.

Discovering the truth of one's self is an approach very natural to Mary Mazzarello's character; a reflection of her own personality and spirituality. She was very simple and frank, with an ardent character, and she expected that same simplicity from those around her. The inner character that she wished to draw out of others  was one of right intentions, simplicity of heart and inner truth.

Freedom to love, in it's essence, is the ideal presented to us in the life of the Gospel - experiencing life in Christ through the discovery of one's strengths and weaknesses, leading to discover one's personal vocation. It is the practice of inner truthfulness that sets one free to love, the summit of accompaniment:

"Freely do all that charity requires" Letters 35:3